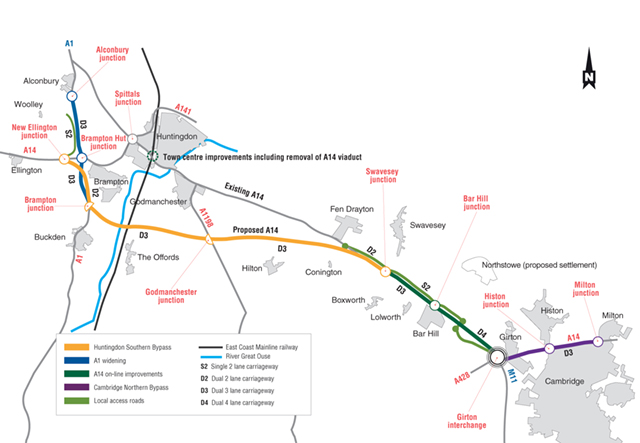 Work for detailed design and two of the construction packages awarded by Highways England.

Highways England has appointed contractors for for the £1.5Bn A14 Cambridge to Huntingdon improvement scheme.

Awarded by Highways England’s Collaborative Delivery Framework (CDF), the scheme is so vast that the work has been split into various stages.

Construction consists of four packages of development, while the detailed design and pre-construction, and delivery sides of the project have also been split.

At a cost of £35.3M, the detailed design has been given to Atkins CH2M joint venture, with the initial award incorporating the development phase which costs just shy of £20M.

When the development gets the final go-ahead, Atkins CH2M will then use its expertise to provide design support and site assurance throughout the lifecycle of the project.

Philip Hoare is the Group Manager Director of Atkins’ Transportation division and he said there will be ‘significant improvement’ at the end of the project.

“The A14 scheme will bring a much needed and long awaited improvement to the road network between Huntingdon and Cambridge that will significantly improve performance and customer experience when it opens in 2020,” he said.

These have been awarded to the Costain Skanska joint venture and the packages are worth a combined £598M of construction work. Currently at the pre-construction phase, the value is £1M.

Andrew Wylie CBE, Chief Executive of Costain, is pleased to be working on a “strategically vital” part of the road network.

He said: “The A14 is a strategically vital transport corridor in East Anglia and we are delighted to have been appointed to this major improvement project by Highways England.”

Skanska’s Operations Director, Glennan Blackmore, added: “We are extremely proud to be part of the team that will deliver significant infrastructure improvement to the strategic roads network, the region and the UK economy.”

The other two packages will see the existing A14 widened from Swavesey to Milton – a package due to be awarded in the summer – and demolition of the viaduct that currently runs over the East Coast Mainline at Huntingdon, along with associated works.

The CDF will tender this final package in 2019.

At approximately 25 miles long, the work will see a congested stretch of road alleviated by enhancing the capacity and reliability of the road. This will result in better journeys for those who use the A19.

Chris Taylor, Director for Complex Infrastructure at Highways England, commented: “While we appreciate our planning application is yet to be fully examined by the Planning Inspectorate and we are yet to receive permission to start construction, these appointments will give us the support we need to prepare for works getting underway on time and to budget.”

Once this is all approved, work will commence and current timetables show that this is expected to start towards the end of next year.