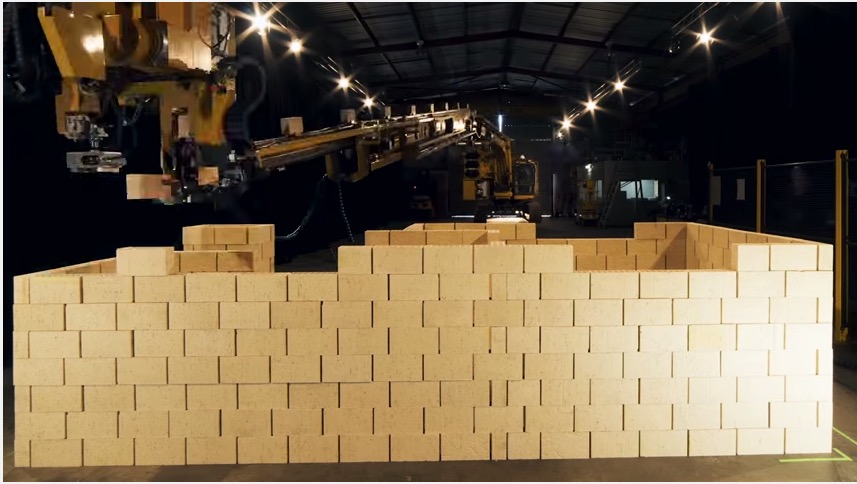 We have seen numerous developments in technology in the construction industry over the past number of years. The advancement of Building Information Modelling (BIM), the use of virtual reality, drones, 3D laser mapping, among others has revolutionised the industry. The latest technology to be showcased is Hadrian X, from Australian firm Fastbrick Robotics.

Hadrian X is a robot that can lay 1,000 bricks an hour from a stationary position and build a house in just two days.

Given the chronic shortage of housing within the Britain and the government’s ambitious housebuilding programme, the robot would certainly be in demand.

On their website, Fastbrick Robotics states that it “aims to make improvements in the areas of speed, accuracy, safety and waste” for the construction sector.

The Company has released a timelapse video to showcase the bricklaying skills of the robot.

Rather than using the traditional method of cement to hold the bricks together, Hadrian X will use a special construction glue as an adhesive. It is capable of working with bricks of almost any size and can cut, grind and mill each brick to fit.

The robot is mounted to the back of a truck, enabling it to be simply transported to construction sites. It has a 92ft boom that is attached to the main unit and uses its hand or claw to pick up and lay the bricks following instruction from 3D CAD software and laser guided system.

The robot brickie is named after the Roman emperor Hadrian, who in 122 AD began to build a defensive wall that stretched nearly 75 miles long – better known as Hadrian’s Wall.

CEO of Fastbrick Robotics, Mike Pivac, believes that the technology could transform the construction industry. He said: “We are a frontier company, and we are one step closer to bringing fully automated, end to end 3D printing brick construction into mainstream.

“We’re very excited to be taking the world-first technology we proved with the Hadrian 105 demonstrator and manufacturing a state-of-the-art machine.”

So should bricklayers be worried? Mr Pivac said the invention is nothing personal against the skills of bricklayers but the robot is an attempt to speed up and improve the housebuilding process.

Speaking about how people might feel their jobs could be under threat from the advancement of technology in the construction industry, Director of the RICS Built Professional Groups, Alan Muse, told UK Construction Online: “There’s always been a fear of new technology ever since the Luddites; it’s a fact of human existence. The key point here is if you look at history, technology has never displaced labour to any great degree. So actually those fears are unfounded in most cases.

“You can see it with computers; CAD systems and going further back, you see it with other examples from history. So what happens is new service streams are developed, which allow analysis and use of the technology so it’s an unfounded fear that’s the first thing for the industry to realise.

“Secondly, I think it’s a very exciting change in the industry that’s looking to deliver better project performance. Most professionals should support that if they understand the fear of replacing their job, all be it a fear that is real in terms of some automated processes does allow potential for new service streams to develop and it’s the new service streams that people should be looking at that. They’re the frontiers of our profession.”