Since July 2014 we have provided services to Tata Steel Projects, Aecom, Capita, Amey and Balfour Beatty.

The services provided to these clients included:

Other Services we offer include: 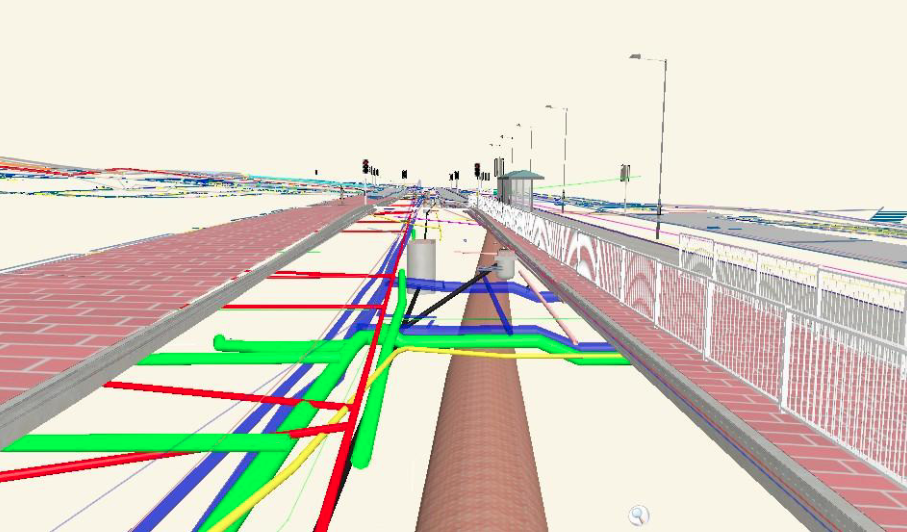 We can create 3d models for you which comply with the BIM principles.

These models will show all 3d elements, such as pavement layers and street furniture, allowing quantities to be extracted directly from the model and 4d schedule simulation to be carried out.

If you need help with setting up your project we can provide a mentoring service to ensure that you adhere to the principles of BIM.

We can advise you on collaboration methods and ensure that file structures are set up in accordance with the principles of BS 1192.

We can provide training for your team in MXRoads using the traditional string modelling methods or the new Openroads tools so that you can create a BIM compliant model.

We can provide training regardless of the level of experience of your team - we can work with complete beginners or with more experienced Engineers wishing to make the transition from string modelling to using the Openroads tools.

To find out more about Openroads and MXRoads tools please read the information below or visit our website.

About BIM and Openroads

Originally, the BIM acronym stood for Building Information Modelling as the process is widely used within the building and architectural world, however for the Infrastructure world the acronym has been renamed as Better Information Management, which is a better way of describing what BIM is all about.

The BIM revolution has arisen because the industry has realised that it does not manage its construction and asset information effectively, and does not make best use of emerging technologies that have been adopted by other industries.

In 2011 the UK Government published its Construction Strategy, which called for a profound change in the relationship between public authorities and the construction industry, to ensure that the Government consistently obtains a good deal and that the country has the social and economic infrastructure it needs for the long-term. In the wake of the Global Financial Crisis, the strategy set out the levers for achieving savings of at least 20% on typical capital expenditure costs and delivering higher quality built assets.

The Government’s 2011 Construction Strategy, refers to the adoption of Level 2 BIM by July 2016. The chart below describes the differences between the levels of BIM, as understood in the UK construction context. 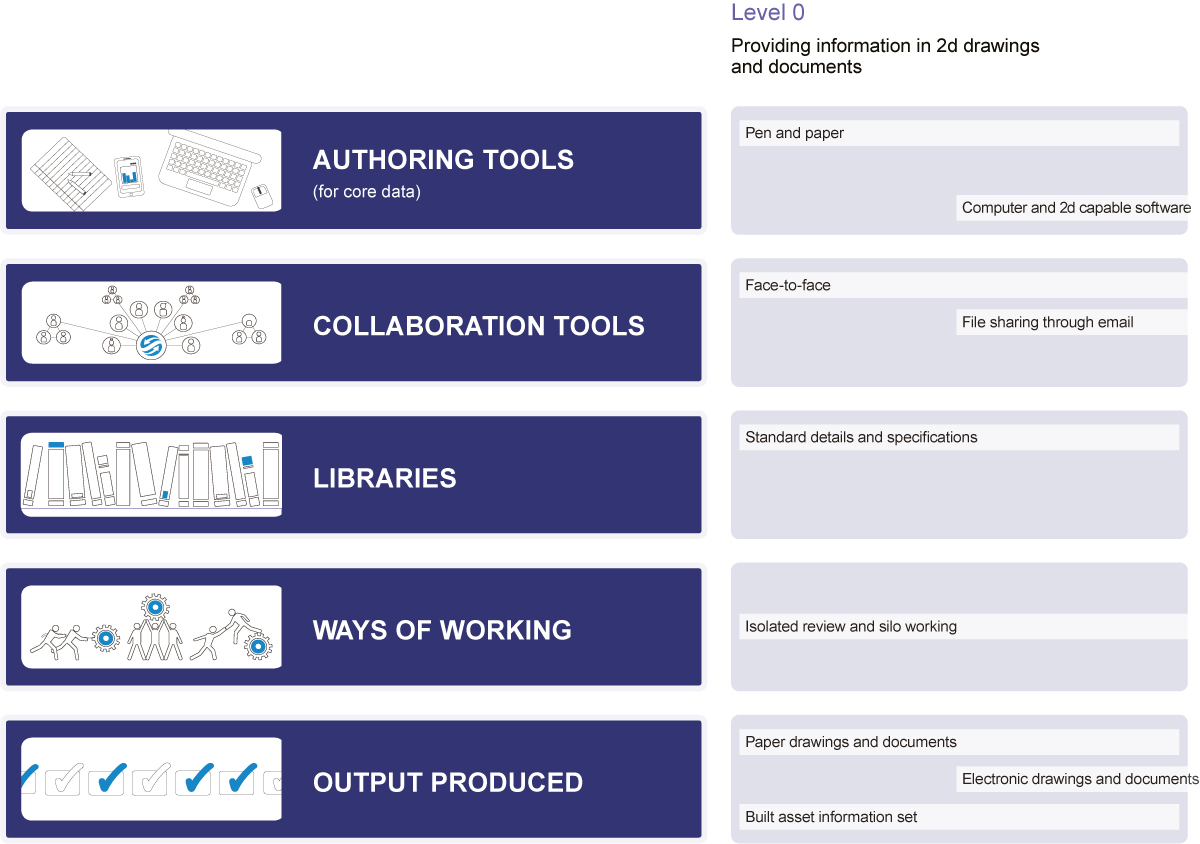 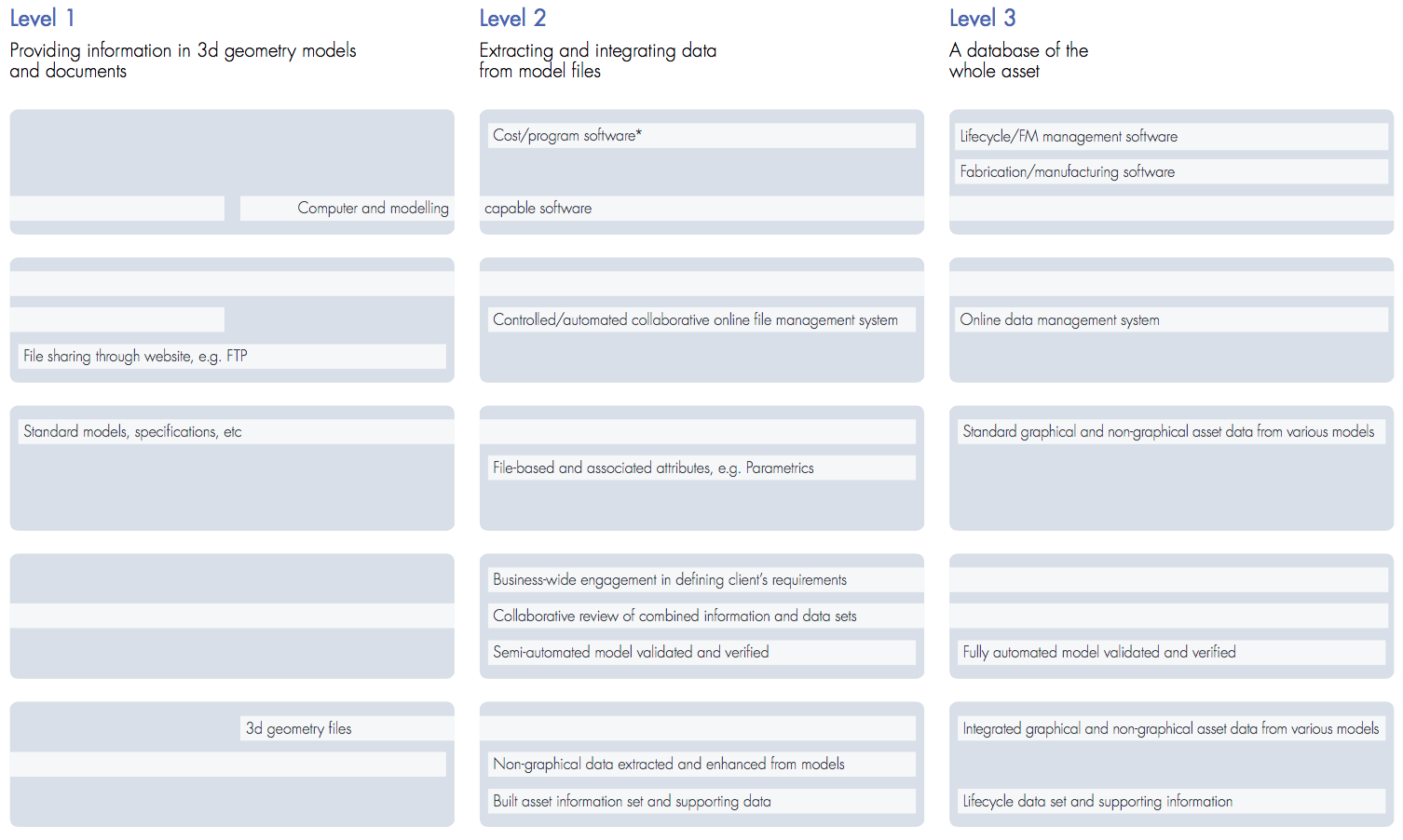 How does MXRoad and the Openroads tools enable the BIM processes

MXRoad has been the industry standard highway design software since the 1980s when it was known as MOSS.

At this time the software was written in the Fortran computer language, which was acceptable at the time it was written, however it does not allow the requirements of BIM Level 2 to be achieved.

The authors of the current MXRoad software, Bentley Systems, realised these shortcomings and re-wrote the software using modern software meaning that the requirements of BIM Level 2 can be achieved using MXRoad. These new set of tools are called the Openroads tools.

We have been using MXRoad since the 1980s in its previous guise of MOSS and we have become the industry leaders in using the Openroads tools.

The Openroads tools allow us create 3d models using geometry to the DMRB standards with information attributed to elements such as pavement layers which can then be extracted directly from the model, which is one of the requirements of BIM Level 2, as seen in the graphic above. This process is commonly known as 5d cost estimation.

The Openroads tools also allow us to carry out scheduling of the model, which means that the programme can be aligned with the 3d model allowing us to create an animation showing the construction sequence of each element. This is an invaluable aid in demonstrating how the scheme is built and what is built at each stage of the programme.