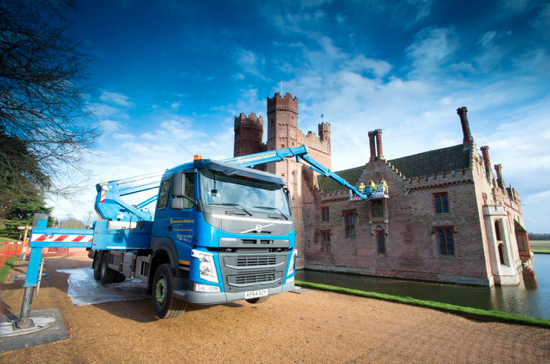 Equipment: A Bronto T50JB truck mounted platform with a working height of 50 metres

Project: Part of on-going maintenance and repair work to help restore the National Trust’s Oxburgh Hall to its former glory, Nationwide Platforms provided N.F Coverdale Ltd one of its large truck mounted platforms to help remove moss, lichen and algae from the property’s roof and walls as well as clear gutters and replace missing and broken tiles.

Built in 1482, Oxburgh Hall is a Grade I listed manor house surrounded by a large water-filled moat. As well as presenting challenges around how to safely and efficiently carry out the necessary work at height, the manor house’s historical importance meant that all work needed to be planned and delivered with particular consideration to preventing any damage. Still open to the general public, appropriate measures were also required to ensure the work was carried out in a safe manner and with minimal disruption.

Following a site survey to assess the extent of the work and ensure ground conditions were suitable, a Bronto T50JB truck mounted platform was chosen to carry out the work. Offering a 50 metre working height and up to 35 metre outreach, the T50JB not only provided a safe solution to working over the eight metre wide moat, it also granted workers unrestricted access to all aspects of the manor including its roof, windows, chimneys, crenellations and guttering. It also reduced time and labour constraints often demanded of traditional means of access, such as the use of scaffolding.

The T50JB’s extendable platform basket, coupled with an impressive 600kg capacity, allowed three operators to quickly and systematically clean up to four metres of the roof before repositioning the boom. Nationwide Platforms also provided a highly experienced operator to safely manage and control all movements to prevent any accidental damage or impact to the building. Finally, the use of the truck mounted platform, in conjunction with an effective pedestrian management system, ensured minimal distraction to visiting guests, who were still able to view the all aspects of the manor house as opposed to it being enshrouded by scaffolding. 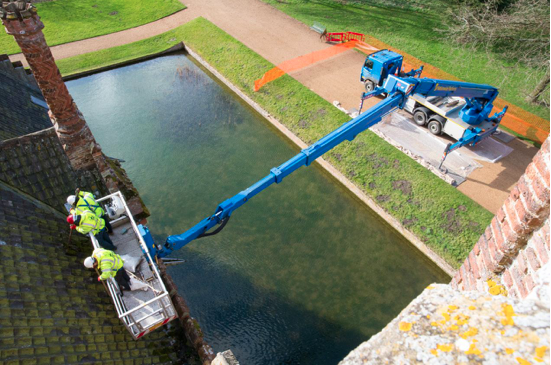 “As the manager of a historic building with significant environmental and heritage conservation considerations, it was critical that I worked with a company that understood my needs, and were able to conduct themselves accordingly. On the day of the work we were also open to visitors. I am happy to say that from the moment N.F Coverdale and Nationwide Platforms arrived they filled me with confidence, ensuring that they set up with the appropriate environmental controls, operated the platform with the upmost of care round historic architectural features, and ensured any impact to our visitors was minimised.” 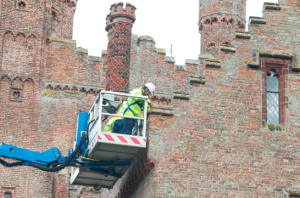 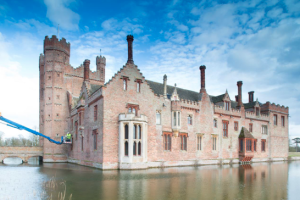 Part of the site survey carried out prior to work commencing included the inspection of the moat and the depth of its water. Given its shallowness, harnesses and lanyards were chosen as part of the safe system of work.

Nationwide Platforms was selected to provide working at height support on the £171million facility.

Nationwide Platforms provided an SX-180 boom lift to assist with construction of the Energy Centre.

Part of a £100 million renewal and enhancement project to improve Scotland's railway network.

Nationwide Platforms have always embraced the ethos of the Birmingham Gateway Project. On such a diverse and complex project, Nationwide Platforms delivered and maintained a service which allowed safety and a complex programme to run in parallel. Continued support and initiatives throughout the lifespan of the project afforded us the opportunity to experiment with new products with a view to making work at height a safer environment to be in.

Nationwide Platforms in association with Mace delivered an on-site demonstration day covering emergency descent procedures and pre-use inspections which was a huge success and the sessions were delivered to more than 180 operatives in five different languages. Through engagement with our supply chain, Nationwide Platforms have introduced and trialled various new products on site with the full support of Mace on every occasion. Over the last three years the relationship between Mace and Nationwide Project has become very strong and without the continued support, commitment and professionalism of the team at Nationwide Platforms none of this would have been possible. I look forward to working with Nationwide Platforms in the future.

Nationwide Platforms’ off-site support in the planning stage and during the onsite activities was second to none. It was also extremely helpful in assisting with the programming and completion of our works. The onsite team were courteous, helpful and always on time.

Nationwide Platforms’ equipment was also of a great quality with all the latest safety features we would expect and more. The performance all round would lead us to have no issue with both recommending and hiring Nationwide Platforms in the future.