The Cromer Road interchange on the Norwich Northern Distributor Road (NNDR) project involves the construction of a new overbridge to take the re-aligned A140 Cromer Road over the NNDR.

The A140 is one the primary traffic routes into Norwich city centre.

The design of the new bridge placed it very close to the edge of the existing Cromer Road and as such, it would need to be constructed while traffic was still using the existing road. Initial construction planning highlighted that extensive temporary works that would be required to construct the bridge.

Initial feedback from the supply chain was that these temporary works were envisaged to cost approximately £500k. In order to mitigate the potential cost and time impacts on the project, BB proposed that the design alignment of the new Cromer Road be amended to move the new bridge further away from the existing road.

By employing the services of Cassidy Forsythe LTD, a specialist BIM Engineer was able to produce an integrated 3D model for the proposed road realignment and bridge repositioning. This model included all relevant temporary and permanent works items, including highway alignment, utility diversions and earthworks slopes.

The model demonstrated that the road could be realigned within the applicable highway design standards, without necessitating a formal change to the scheme DCO. As a result of the bridge being repositioned, the scope of the temporary works was significantly reduced – as shown in the screenshot from the model below. 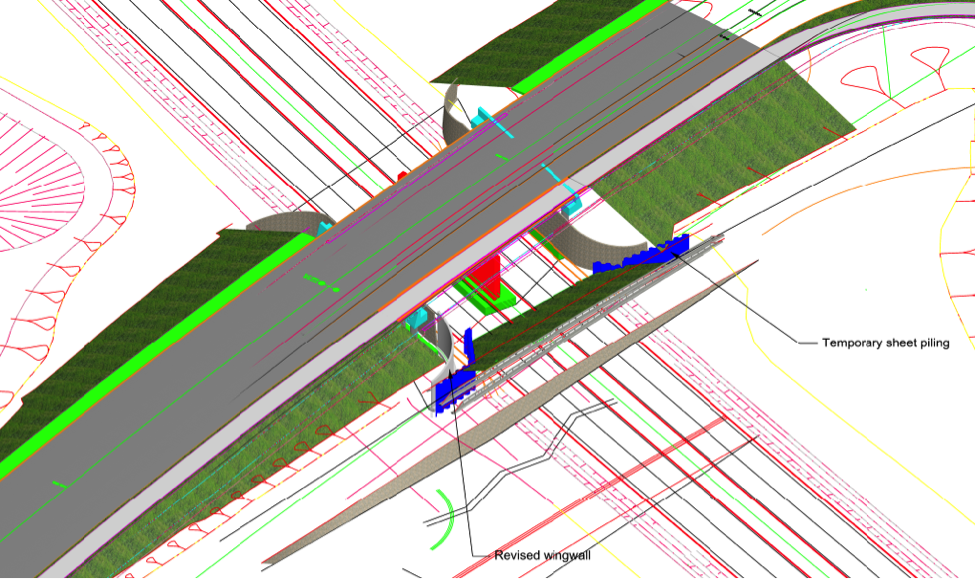 The price of the revised sheet piles amounted to £110k and programme savings in the region of four weeks were also achieved from the reduced temporary works scope. The difference in cost between the original temporary works and the revised temporary works has realised savings amounting to approximately £400k. These savings are directly attributable to the BIM Engineer’s ability to create 3d models of the bridge and challenge to design provided by the client.

The model was presented to the Client’s lead designer, which he subsequently accepted and incorporated into their overall model for the NNDR scheme.

A 3d model was created to demonstrate the construction sequence to Network Rail.

The 3d model and film allowed Cassidy Forsythe to gain approval for the scheme.