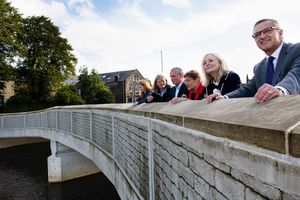 A new flood alleviation scheme in Mytholmroyd, which will provide greater protection to 400 homes and businesses as well as local infrastructure, schools and other public amenities, has officially been opened.

More than £41 million has been invested into the new defences as part of a partnership working to make the village more resilient to the impacts of climate change. The funding was secured for the scheme following on from the devastating floods of Boxing Day 2015, when 2,781 homes as well as 1,008 businesses were affected throughout Calderdale.

Mytholmroyd experienced its highest ever recorded flood levels, with approximately 300 properties and 70 businesses being flooded as well as the church, church hall, two schools and the community centre.

The Environment Agency has worked in partnership with Calderdale Council and alongside members of Calderdale Partnership Board to provide Mytholmroyd with the best possible flood protection. Design and construction was completed by VBA Joint Venture.

The newly completed scheme includes construction of new, raised and improved flood walls along with the relocation of Calder Bridge, widening of the river channel at two key locations and flood-proofing many buildings next to the River Calder and Cragg Brook.

Emma Howard Boyd, Chair of the Environment Agency, said: “I first visited Mytholmroyd in the aftermath of Boxing Day 2015 and I am delighted this scheme has been conceived, designed and built since then. It provides better protection for the village and will also create valuable time for people to prepare when flooding is about to happen.

“Climate change is increasing the frequency and severity of floods everywhere and everyone needs to adapt. The combination of engineered and natural approaches to flood risk here should inspire future projects all over the country.

“Thank you to local residents, businesses and commuters for their patience and cooperation while the construction of this complex project has been carried out.”