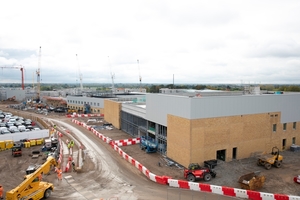 Deputy Prime Minister Dominic Raab has unveiled the greenest and most innovative jail in the country. The new prison at Glen Parva, Leicestershire, is the greenest ever as the government moves towards operating as net zero in the future.

The new prison will also play a crucial role in cutting crime by training up to 500 prisoners at a time in the skills of the future such as coding, recycling and waste management to help them find a job on release in new and emerging technologies and dramatically reduce their chances of reoffending.

The major infrastructure project acts as a blueprint for the government’s ambitious prison-build programme, which will create 20,000 modern, rehabilitative places by the mid-2020s. The programme is backed by unprecedented funding of £3.8Bn confirmed in the Spending Review.

Deputy Prime Minister, Lord Chancellor and Justice Secretary Dominic Raab said: “We are delivering the biggest and most innovative prison-building programme in a century.

“Glen Parva represents the future, using in-cell technology to raise literacy and numeracy standards, and designing workshops to get offenders into work – to drive down re-offending, and protect the public.”

In all, the new prison will be 35% greener than HMP Berwyn in North Wales which was opened just four years ago.

The new prison, opening in 2023, has been largely built off-site using cutting edge technology – speeding up construction and minimising waste. Rubble from the old, demolished prison on this site has been reused and will use green energy including more than 960 solar panels and infrastructure for electric vehicle charging points.

The construction project has also piloted the use of power generators which have been converted from diesel use to be fuelled by specially treated vegetable oil – cutting CO2 by 90 per cent through this fossil-free technology.

Following on from Glen Parva, the next four new prisons have been specially designed to further cut carbon emissions by at least 85% – ultimately saving 280,000 tonnes of carbon and slashing energy bills by £100M.

An additional £12M investment is funding the installation of solar panels at a further 19 prisons in England and Wales, bringing the total number of panels across the estate to over 20,000. More than 200 electric vehicle charging points are also being installed for staff across 40 jails.