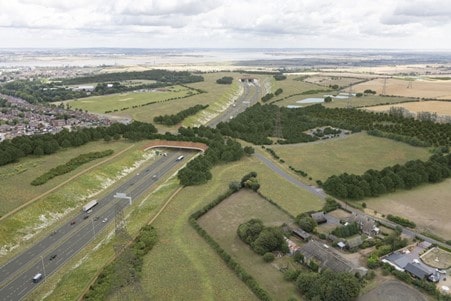 Highways England has revealed that the Lower Thames Crossing will give a significant employment boost to Kent and Essex, with more than 22,000 people expected to work on the UK’s largest road scheme since the building of the M25.

The new crossing will go under the River Thames and will almost double the road capacity between Kent and Essex, easing congestion in the region as well as diverting more than 13 million vehicles a year away from the Dartford Crossing, currently the only river crossing East of London.

Delivery of this new and transformative project will support 10,000 jobs in the peak year of construction, and over the six-year building phase it will employ in excess of 22,000 people, ranging from highly skilled engineers, architects, and designers to other essential staff such as caterers, sign makers and IT support.

Highways England is currently developing a new skills, employment and education strategy which will enable the delivery of the Lower Thames Crossing as well as supporting the long-term skills and employment needs of the local community. Highways England has worked in partnership with local authorities as well as a wide range of stakeholders to understand their aspirations and the local skills market, so they can cultivate a workforce which can support these plans, with the strategy set to be published later in the spring of 2021.

Matt Palmer, Lower Thames Crossing Executive Director, said: “By connecting people to jobs and businesses to customers, the Lower Thames Crossing will add billions to the local economy and play an important part in the Government’s plan to level up the UK. But it also has a more urgent and crucial role to play in our economic recovery by employing more than 22,000 people over the lifetime of its construction.

“Our aim to create local jobs, support local businesses, and nurture the next generation of talent, and in partnership with our contractors we have ambitious plans. We will create hundreds of apprentices and places for graduates and are offering free training to local businesses to help them work on this, or any other major infrastructure project. The scale of opportunity is huge, and I look forward sharing more detail on our approach and plans over the next few months.”

Kate Willard OBE, Thames Estuary Envoy, said: “As the largest road scheme in more than three decades, it would be hard to overstate the monumental impact the Lower Thames Crossing will have on the region. I am delighted that local people and businesses in the Thames Estuary are being given the opportunity to work on this transformative project.”

The Lower Thames Crossing is set to add billions to the UK economy by helping to unlock the massive potential of the Thames Estuary, Britain’s number one growth opportunity. This new connection will provide a quicker, more reliable connection between major manufacturing centres, distribution hubs and key ports, along with opening new markets for local businesses and creating a new economy between Kent and Essex.