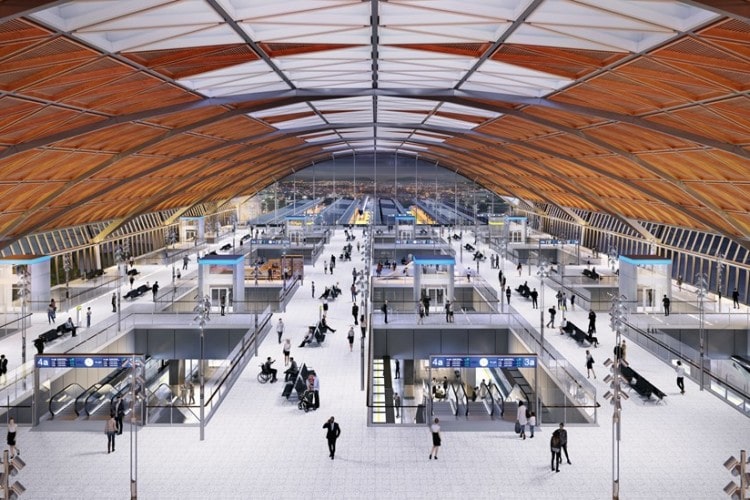 Planning permission has been granted by Birmingham City Council for the construction of HS2’s new Curzon Street station. Three planning applications for the £570 million station and its surrounding landscaping were approved by the council planning committee on 23 April 2020. The report concluded that the station design was to be ‘truly world class’.

The new station has been designed by WSP and Grimshaw Architects, and is set to be one of the most environmentally friendly railways stations in the world. It will have more than 2,800 m2 of solar panelling on the platform canopies, which makes it net zero carbon.

The procurement process for a contractor to build the station has begun, with invitation to tender set to be launched this summer. The station also incorporates the already existing Grade I listed Old Curzon Street Building, which will link it to the new station’s eastern concourse at New Canal Street. It also takes into consideration the existing local heritage such as the Grade II listed Moor Street Station and Woodman Pub.

Birmingham City Council’s report concluded that the ‘elegant and (deceptively) simple form of the main station building clearly reads as a railway station and harks back to traditional station architecture, delivering this in a confident and contemporary way’.

HS2 Ltd Stations Director Matthew Botelle, said: “Eco-friendly innovations are a fundamental part of our plans, with the station designed to achieve zero carbon emissions from day-to-day energy consumption. This makes it highly efficient by generating energy through a range of different technologies to maximise natural resources such as sunlight and water.

“Our design also allows for future improvements to the public space to ensure inclusive, seamless transport connections for local people, provide opportunities for retail and commercial development, and help drive local investment and regeneration. Now that we’ve been given approval, we will continue to work with Birmingham City Council, Transport for the West Midlands, Midland Metro Alliance and Network Rail to make sure that the station is well connected.”