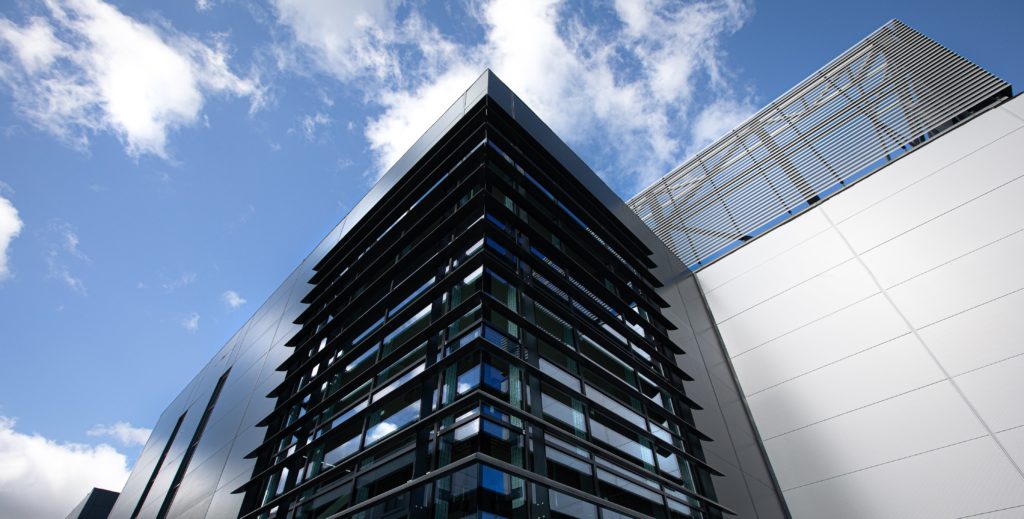 Mace is pleased to announce that it has completed the exterior of the National Satellite Test Facility (NSTF), meaning that the company has reached another major build milestone in the process of becoming the UK’s first co-located set of space test facilities.

The building will house a wide range of specialised equipment to put spacecraft through their paces before launch. Construction partner Mace has now installed the first piece of apparatus for the vibration facility, which tests satellites to make sure they can withstand the bumpy ride into space.

Mace is also working on the Electromagnetic Compatibility (EMC) chamber – which will offer an area free from electromagnetic background noise, where spacecraft electronics can be checked and tested.

Science Minister Amanda Solloway said: “It is brilliant to see how the government-backed National Satellite Test Facility is coming together.

“By providing our flourishing space sector with the capacity to prepare larger, more advanced spacecraft for launch, this cutting edge facility will help ensure the UK remains a world leader in space technologies for decades to come.”

The NSTF will address the UK’s need for a complete set of large scale space test facilities in one building. It will be run by RAL Space, experts in testing and part of the UK’s Science and Technology Facilities Council.

The suspension system, which is the first of the vibration equipment, has been successfully installed on the reaction masses, the two 250 tonne blocks on which the vibration system will stand. At the NSTF, two 22 kN thrust shakers will be used to simulate the vibration of launch and test the satellite in 3 axes, the equivalent of a fully loaded 5 seater bus being strapped to the top of a jack hammer.

Along with the vibration facility, the NSTF will also offer EMC and antennae testing. This requires an electrically neutral space, built into the fabric of the building. 290m2 copper sheets have been laid into the floor of the chamber. Over the next few months this will be joined with copper wall and ceiling panels, creating a copper shield that electromagnetic waves will not be able to pass.

Inside this ‘quiet’ zone satellite manufacturers will be able to accurately measure the ‘noise ’that satellite antennae produce, ensuring that we get a high-quality signal back for our TVs, weather forecasts and science operations.

Rob Bridges, Project Director at Mace, said: “It is an honour to be leading the international multi-disciplinary team delivering the NSTF. From the first design workshop my team have been challenged to bring together a blend of technologies and innovations to design and deliver a future proofed flexible building that will not only house specialist testing equipment but is required to be integral to the testing, providing a stable environment, whilst using the structure as a dynamic part of the testing process.”

The vibration equipment and EMC join the 7m diameter Large Space Test Chamber which arrived in April and will be able to test minibus sized satellites for the harsh conditions of space ranging from -180֯C to +100C.

The National Satellite Test Facility being delivered by Mace, procured under the Southern Construction Framework, has been funded by the UK Research and Innovation as part of the Industrial Strategy Challenge Fund​.