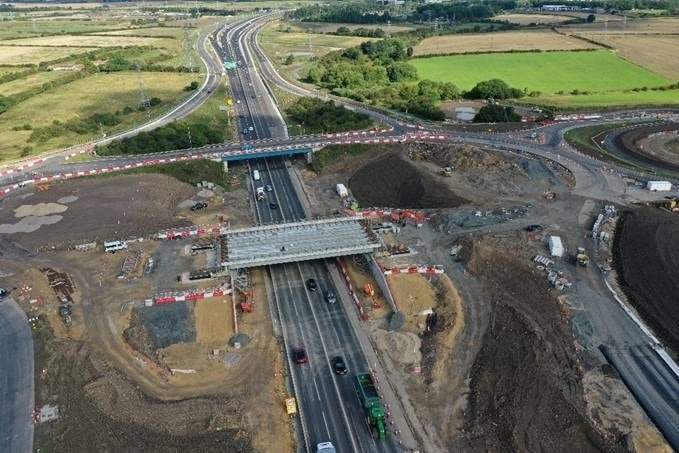 New drone images have been released which show the significant progress which is being made on the £5.1 million road upgrade which will make journeys easier for drives in Tyne and Wear.

The photos show the advancement that engineers are making in National Highways’ A19 investment at the Downhill Lane junction. Work is progressing on the installation of the first of two new crossings over the A19m with the latest images showing bridge beams in place which will allow drivers to travel over the dual carriageway.

Helen Burrow, Project Manager at National Highways said: “We are delighted with the progress that has been made. The team are working hard and safely to put these improvements in place which will provide extra capacity for the area, supporting the regional’s economy and plans for the development of the International Advanced Manufacturing Park (IAMP).

“We’re working as quick and safe as we can to open as much of the A19 and its slip roads as possible which will provide better connections for the area.”

National Highways are also working on construction of a second footbridge which will be used by pedestrians, cyclists and horse riders. The massive project, which began in Autumn 2020, compliments the recently completed £130 million improvement work at the A19 Testo’s junction, and is set to be completed by 2022.

Next to the Nissan plant, IAMP is a joint venture (JV) between Sutherland City Council and South Tyneside Council to offer a place for advanced manufacturing and an attractive location for national and international investment, which could create up to 7,000.

As work continues there will be ongoing lane closures, as well as a planned full A19 carriageway closures during the weekend of Friday 3 September, from 8pm to 6am on Monday 6 September, including:

Further A19 weekend closures are expected during September and October.

Between Monday 13 September and Thursday 16 September the north slip road at the A19 Downhill Lane junction is planned to close for surfacing work.