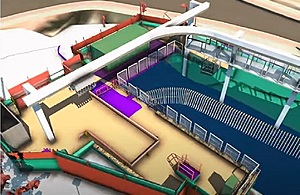 The trash screen used to collect debris and reduced flood risk to Sheffield city centre from the River Sheaf is to get a major upgrade from the Environment Agency.

Work has begun on the £3 million upgrading project to improve the trash screen and replace the mechanical arm which is used to clear it. The work is being done whilst those on site adhere to the strict Government guidance on social distancing and is expected to be completed by the end of the year.

The Sheaf Screen aims to prevent debris from travelling underground and along the river where is could become lodged, which in turn can create a blockage. Blockages which occur underground, in culverts, which are tunnels that carry water under roads, railways and buildings, are extremely difficult to clear, and this can result in flooding to the local area.

The screen currently needs regular cleaning by using a combination of the mechanical arm controlled by an operator, and manual labour, which can be very resource intensive during an incident.

The trash screen which is currently in place is in poor condition, with some of the bars either damaged or missing. The screen is being replaced and two ‘grabs’ are to be installed on an overhead monorail, making it easier to clear any debris when it collects on the screen.

“This upgrade work for the Sheaf screen is critical to help modernise this important piece of flood risk reduction equipment. The improvements mean that the grabs will work automatically around the clock to remove debris from the river and place in a skip for removal, significantly reducing the need for Environment Agency staff to be on site.”

The Sheaf Screen in Sheffield city centre is located at the upstream end of a 750m culvert which carries the River Sheaf below the central train station and the markets area. It joins up with the Porter Brook which is also largely hidden from view in the city and heads towards its confluence with the River Don.

As well as natural vegetation, the Sheaf Screen regularly collects larger objects including mattresses, tree trunks, bikes, branches, and pipes. If these were not caught by the screen, they could cause a significant blockage and increase the risk of flooding to the city.