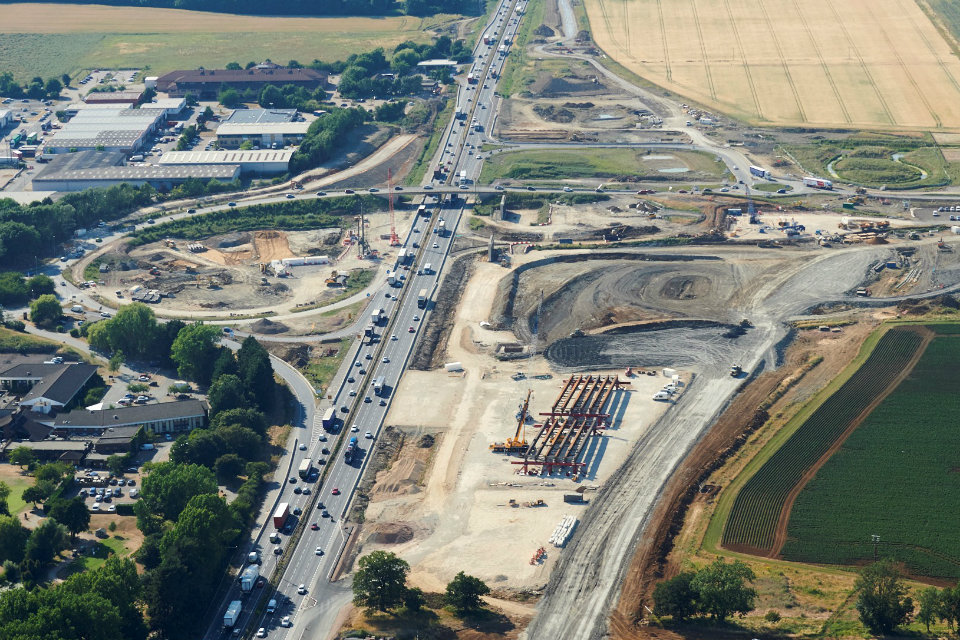 Work on the A14 Cambridge to Huntingdon route has seen an innovative technique employed to install two 1,000 tonne bridges in one weekend, without closing the road.

The team employed on the upgrade of the route were faced with the tricky question of how to install the new bridges on this very busy route, without significant delays to drivers. The team came up with an innovative technique, which has seen them build the bridges and abutments at the side of the road, then wheel them into place!

Four abutments to support the new bridges, as well as the two bridge decks, have been built at the side of the live carriageway over the last few months. They are now ready to wheel the 44m bridges decks into place on top of the abutments.

An engineering video has been released by the team to show exactly how they plan to tackle the challenge – and it involves a very big, remote controlled platform on wheels. Installation is due to take place during the weekend of 14th September.

The bridges are part of the A14 upgrade scheme, a £1.5Bn major improvement scheme to improve the 21-mile stretch of the A14 between Cambridge and Huntingdon, upgrading three lanes in each direction and including a brand new 17-mile bypass south of Huntingdon, with four lanes in each direction between Bar Hill and Girton. The project, which includes 34 bridges and main structures, will add additional capacity, boost the local and national economy and cut up to 20 minutes off journeys.

David Bray, project director for the A14 Cambridge to Huntingdon upgrade at Highways England, said: “Redesigning and building the Bar Hill junction was identified from the start of the project as one of the main challenges we would have to tackle. I am delighted that we’ve found a way to build the two bridges while keeping the A14 open as much as possible and disruption for people locally and road users to a minimum. And I am also excited that we’re using such an innovative solution to our challenge – that’s what makes my job so interesting.”