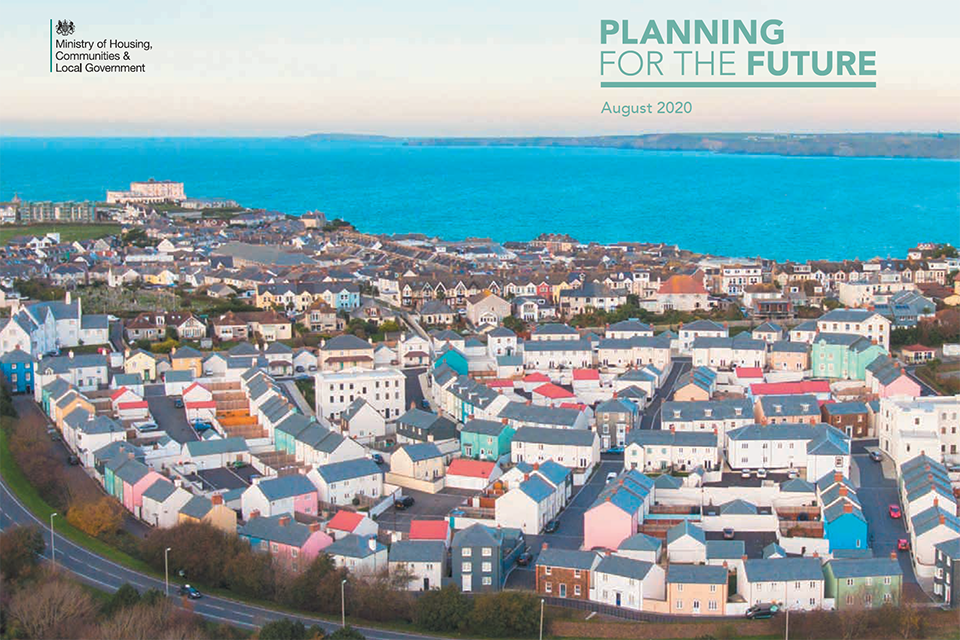 The UK Government has announced a major overhaul of the country’s outdated planning system so that it can deliver the high-quality, sustainable housing communities need.

The Housing Secretary, Robert Jenrick, announced the landmark changes on 6 August 2020. The changes will transform a system that has been criticised for being too sluggish when providing housing for families, key workers, and young people and too ineffectual in obliging developers to properly fund the infrastructure to support them, such as schools, roads and GP surgeries.

Value green spaces and Green Belt will continue to be protected for future generation with the new reforms allowing more building to be done on brownfield land. Local community agreements will also be at the heart of the proposals being put forward in the new Planning for the Future whitepaper which was also published on Thursday 6 August 2020.

The new changes will be a massive boost for SME builders who are currently cut off by the outdated planning system. They will now become key players in getting the UK building on the scale needed to drive further economic economy, while leading homebuilding that is beautiful and also builds on local heritage and character.

Recent studies have also shown that smaller firms feel the complexities of the planning process and is associated risks, delays and costs are the main challenges they face when it comes to homebuilding.

Housing Secretary Rt Hon Robert Jenrick MP said: “Our complex planning system has been a barrier to building the homes people need; it takes 7 years to agree local housing plans and 5 years just to get a spade in the ground.

“These once in a generation reforms will lay the foundations for a brighter future, providing more homes for young people and creating better quality neighbourhoods and homes across the country. We will cut red tape, but not standards, placing a higher regard on quality, design and the environment than ever before. Planning decisions will be simple and transparent, with local democracy at the heart of the process.

As we face the economic effects of the pandemic, now is the time for decisive action and a clear plan for jobs and growth. Our reforms will create thousands of jobs, lessen the dominance of big builders in the system, providing a major boost for small building companies across the country.”

Heather Lindley-Clapp, Associate Director at Nexus Planning’s Manchester office said: “We welcome the government’s drive to front-load the planning process through the update to both national policy guidance and the introduction of local design guides across the board, and supporting schemes which comply with local guidance.

“There will be a greater desire to ensure development is well-designed and in-keeping with local circumstances and will fast-track those developments which comply with the guidance. In this regard however, it will be important for local authorities to seek to produce local guidance and local authorities will have additional pressures to produce detailed local design guidance which will require input from experts across the field. Using ‘best practice’ guidance will assist local authorities, but this will likely be a relatively costly and lengthy process.”

Responding to the Planning for the Future White Paper Richard Brown, Deputy Director at Centre for London said: “The government’s proposals are radical and far-reaching. They offer potential – for more meaningful community engagement, higher design standards, a less costly and risky planning system, and more clarity for smaller builders and developers.

“However, implementation will be complex, and a reformed planning system will need to be backed up by other incentives to accelerate house building. London already has a ‘pipeline’ of 280,000 homes that have planning permission but have not been built.

“And the White Paper is silent on London, the role of the Mayor and the London Plan, and the role of other metro mayors and combined authorities. The complexities of England’s cities call for intelligent and engaged regional, as well as local planning.”

The reforms will mean:

The Housing Secretary also confirmed that the First Home schemes is provide newly-built homes at a 30% discount for local people, key workers and first-time buyes. This discount will be locked into the home in perpetuity, ensuring future buyers can continue to benefit from it.

Revenues would be spent locally on projects such as new roads, upgraded playgrounds and discounted homes for local, first-time buyers.

Towns and high streets will benefit from renewed development too, with the reforms speeding up and simplifying the process, breathing new life into vacant commercial property and industrial spaces, and where desirable, transforming them into new houses.

Decisions on the Green Belt will stay with local authorities as they prepare their plans, so that we can continue to protect and enhance these important areas for generations to come.

Following the publication of Planning for the future, the government will now consult with planners, lawyers and local government experts on the proposals, as well as interest groups and residents.