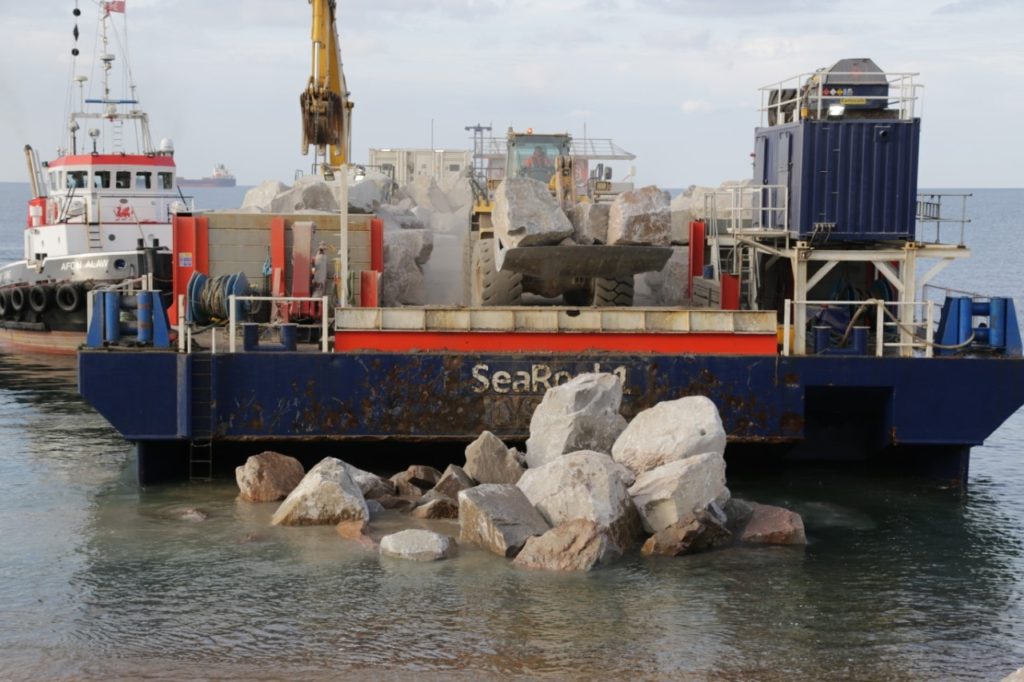 A joint venture between Aggregate Industries and Earlcoate Construction, known as SeaRock, has completed delivery of armour stones, on behalf of principal contractor Bam Nuttall, as part of a £9M project, commissioned by Defra, the West Dorset Council, and the Wessex Regional Flood Defence Committee, to protect West Bay on the Dorset Coast.

SeaRock delivered 36,000 tonnes of stone, with each stone weighing between 0.3 and 10 tonnes, from Aggregate Industries’ infamous super-quarry in Glensanda, Scotland via a transport vessel, named the Mobile Pearl, which traversed 500 nautical miles before laying anchor at an agreed position that was 1.4 miles away from the Dorset Coast’s Marine Conservation Area.

From that point SeaRock employed an operational team, with over 100 combined years of experience, to collaborate with the venture’s marine partner, Holyhead Towing, who provided various specialised shallow drafted tugs.

Using the specialised vessels, provided by Holyhead Towing, SeaRock were able to deliver between 1,200 and 1,800 tonnes of stone per tide from ship to shore, with this mode of delivery being a significantly cheaper option, requiring a total of zero road miles, and taking a total period of just 15 days.

Specially determined routes were then drafted to transport the loads of rock to West Bay’s East and West shores so as to minimise the impact of the delivery upon fishing areas, any Special Areas of Conservation, and achieve maximum plant utilisation and efficiency.

The Overseas Director at Aggregate Industries, Stephen Dryden stated: “Aggregate Industries had previously supplied a 26,000 tonne project to renovate and protect the harbour at Portrush in Northern Ireland, but in that instance the customer collected the rock armour. That made us think, in future, our customers would benefit from us managing the entire process.

“That led to us forming SeaRock by partnering with specialist civil engineer Earlcoate and acquiring the SeaRock 1 barge on a long term charter. Our first project as SeaRock at West Bay went smoothly and is testament to the expertise of all parties involved.”

West Bay of Dorset’s Jurassic Coast World Heritage Site has recently been suffering from a rapid rate of erosion on account of them being comprised of soft sandstone, interspersed with slightly denser red quartzite.