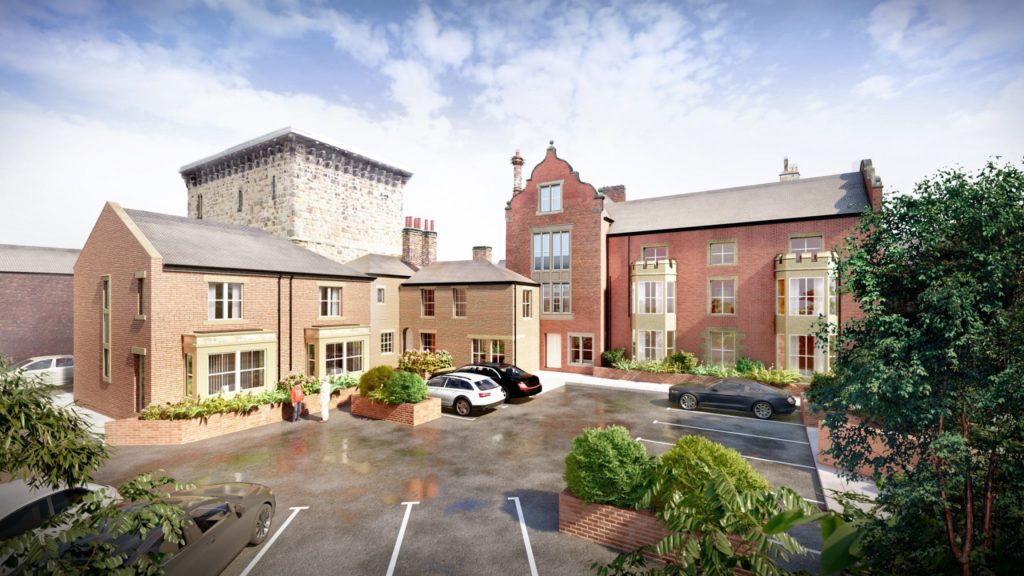 A Grade II listed building in the market town of Hexham is to be sensitively converted into 16 new homes.

The historic building, Prospect House, sits in the shadow of the town’s Old Gaol, Moot Hall and Hexham Abbey. Financed as a joint venture between LOK Development, part of north east development company the Morton Group, and Hilltop Credit Partners, the development will be ready to welcome new homeowners in early 2021. The former council building will be converted into 11 apartments, with an addition of five new build properties.

This prominent development has been named Montague Court after the 1st Marquees of Montague and Earl of Northumberland, a leading partisan in the War of the Roses.

Original plans for the redevelopment were amended in December 2019 to incorporate an improved design, which is sympathetic to existing features and improves the offering by reducing the number of homes by two and increasing the size of several apartments, with work on the site starting in January 2020.

Once complete, Montague Court will incorporate one 3-bedrom apartment, along with ten 1 -and-2-bedroom apartments in the old building, along with five new build properties to the front and rear.

Business Development Director at The Morton Group Chris Nunn said: “This is a landmark building which is viewed with real importance to people living in Hexham.

“We’ve spent a great deal of time changing the look and feel of the building, which was cramped and not well laid out since it was last used as a council building in 2016.

“With expertise in restoring buildings of this nature, we’ve retained as many of the historic original features as possible, and we’re delighted to be breathing new life into an important building and to restore it to its former glory.

“This is a really nice development, close to the Abbey, Old Gaol and Moot Hall in the heart of Hexham market town, which has fantastic views over the Tyne Valley, with access to residents’ parking.

“We have an excellent tracked record of delivering sensitive restorations of Listed buildings and have previously converted Middleton Hall in Northumberland and recently restored All Saints Church in Newcastle.

“Hexham has a strong housing market and we’re sure units in this sought-after town will be snapped up when they are released in early 2021.”