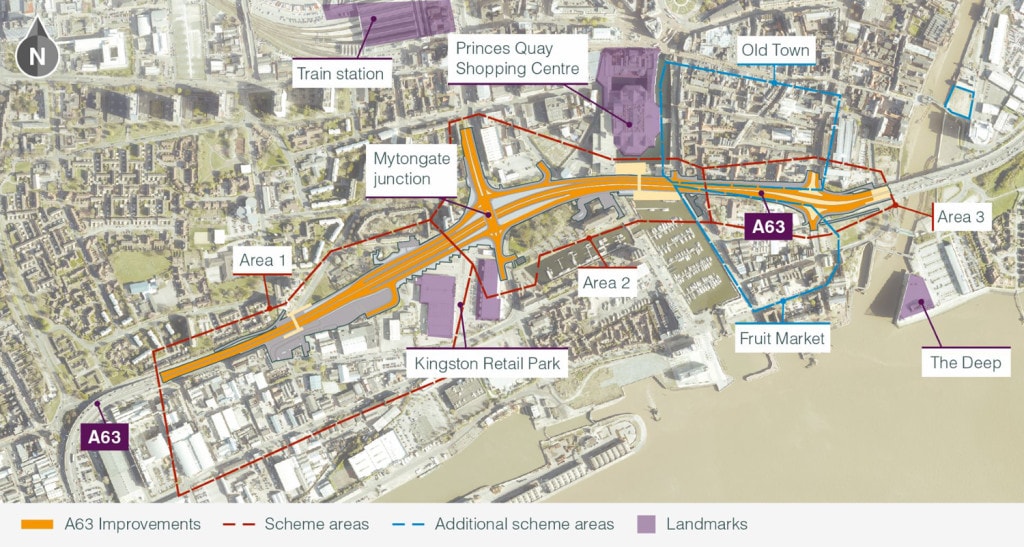 Balfour Beatty have announced they have been given the go-ahead to begin work on the £355 million A63 Castle Street road improvement scheme.

The A63 Castle Street upgrading scheme is intended to improve traffic flow between the Port of Hull, the A63 and the M62 along with the wider strategic road network.

The core of the project is the improvement of the Mytongate junction in Hull City Centre, by lowering the A63 by seven metres to create an underpass for through traffic to keep moving. Ferensway and Commercial Road will cross at the A63 by creating a split-level junction. The eastbound carriageway between Princes Dock Street and Market Place will be widened from two to three lanes, with a new bridge being built over the A63 at Porter Street

Grant Shapps, the Secretary of State for Transport has finally signed off the scheme, which Balfour Beatty were appointed to by Highways England under an early contractor involvement (ECI) design and build contract, in 2014.

A spokesperson for Highways England explained: “The A63 Castle Street scheme is a complex project which presents a number of unique engineering challenges. These include the ground conditions at the site, the proximity of the Humber river and the work required at 237-year-old Trinity Burial Ground. Once complete, it will transform Hull with much better connection between the city centre and the retail and docks area.

“The original 2013 figure [£160m] was an estimate prior to the scheme being designed, since then costs have risen reflecting the unique nature of the project. Work starts this month on the Castle Street major project, which is due to be finished in 2025.”

Cllr Daren Hale, Portfolio Holder for Economic Regeneration and Planning at Hull City Council said: “We are thrilled to see this long-awaited projecting finally given the green light. Over the past twenty years the council has worked tirelessly alongside Highways England, our colleagues in the LEP and our local MPs to lobby for this essential upgrade and to ensure this scheme is high on the agenda for the Department for Transport.

“We are pleased that the government has finally recognised how crucial the upgrade to the A63 is, providing a key component of the city’s transport infrastructure improvement and wider long-term regeneration plans.”

Meanwhile, a new cycle and footbridge over the A63 was wheeled into place by Interserve in November 2019, and, will open this summer. It will connect the city centre to the marina, waterfront, and fruit market.

Highways England senior project manager James Leeming added: “We are delighted that the decision has been signed off, and we can now look forward to delivering improvements that will genuinely transform the city. These changes will make life considerably easier for road users and pedestrians. I want to take this opportunity to thank everyone who has supported our plans, and I’m sure they share our delight in hearing the news we’ve been waiting for.”