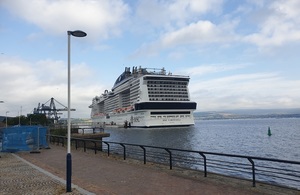 Construction of a new cruise ship visitor centre in Greenock is currently under way as part of a £19.2 million development which will welcome passengers and crew from some of the world’s biggest and most luxurious cruise liners to Inverclyde.

The project, which is being led by Inverclyde Council, is part of a £1 billion Glasgow City Region City Deal funded by the UK and Scottish Governments, with contributions from Peel Ports (£8 million), operators of the existing Greenock Ocean Terminal, and the George Wyllie Foundation via the Dunard Trust (£1.5 million).

It is hoped the new development will increase visitor numbers to 150,000 passengers per year, as well as providing a £26 million boost to the Scottish economy.

The dedicated cruise ship visitor centre will feature an arrivals/departure hall as well as a museum paying tribute to the late, world-famous artist George Wyllie, who worked as a Customs Officer in Greenock and lived for many years in Gourock, and a high-end restaurant and roof terrace with panoramic views of the River Clyde.

Work on the visitor centre has resumed following the appointment of a new contractor after the original builder withdrew for financial reasons.

Leader of Inverclyde Council, Councillor Stephen McCabe, said: “This is an important milestone in a development which is of huge significance to Inverclyde, the wider city region and Scotland.

“We want people from near and far to discover Inverclyde, and making a positive first impression with a striking visitor centre – coupled with our famous warm and friendly welcome – will help to do that and encourage our guests to return again in the future.

“The building will also be an asset for the local community outside of the cruise call season and is part of the ongoing regeneration of Greenock Town Centre, so there are many benefits of what will be a first-class facility.”

Scottish Government Tourism Minister, Ivan McKee, commented: “I am pleased to see such a remarkable development, especially given the strains of the pandemic.

“This new visitor centre at Greenock Ocean Terminal will make a significant contribution to the local area, supporting economic growth in the local community and the wider city region whilst promoting tourism.

“The Scottish Government is contributing £500 million over 20 years to the Glasgow City Region City Deal. The investment in this project through the deal will contribute to the region’s economic recovery by creating jobs and providing the commercial infrastructure to support and attract businesses to the local area.”

The new berth and visitor centre will also free up space at the busy Greenock Ocean Terminal, which was originally built as a container terminal, for freight business.

The striking new state-of-the-art visitor centre was designed by Richard Murphy Architects and is being built by Heron Bros. The building is expected to be completed by summer 2022.