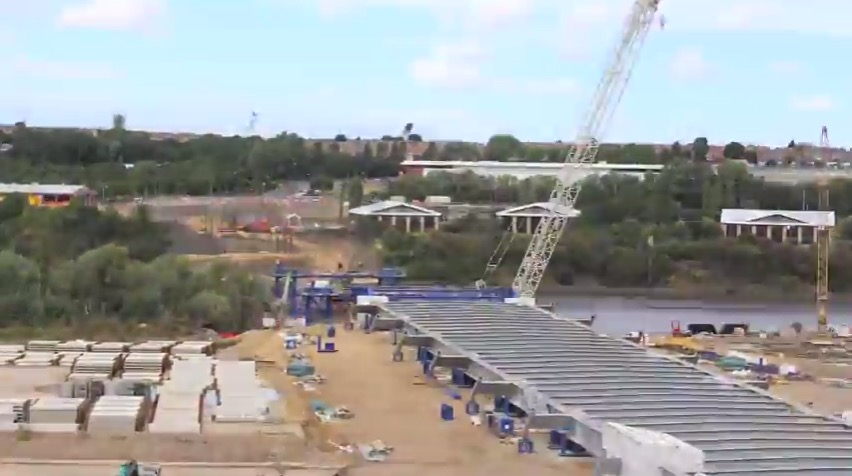 The £117m New Wear Crossing project moved a big step closer last week as a large section of the bridge was moved into place.

The first section of bridge deck weighing in at around 2500 tonnes was pulled 120 metres across the river from the embankment in Pallion, taking around ten hours to complete.

Hydraulic jacks were used to gradually move the steel frame, pulling the deck between ten metres and 15 metres per hour.

The centrepiece of the bridge, a 105-metre high A-frame pylon, is due to arrive on site this winter and will be raised into position. The extended bridge deck will then be pulled into position across the width of the river.

A series of cables will then be secured between the pylon and the deck later in 2017, and once they are fitted and tensioned to take the weight of the bridge, the temporary supports will be removed.

Patrick Van Severen, Project Director for Victor Buyck Steel Construction, said: “This kind of bridge deck launch operation is always very exciting for our team because it is one of the major landmarks in the construction process, where people can see the scale of the project.

“We’re on track to open the new bridge in spring 2018 and our focus over the next few months will be on constructing the second phase of the bridge deck and bringing the pylon to Sunderland and then raising it in the river, which will be a spectacular sight.”

It is the first bridge to be built over the Wear for over 40 years and is part of the wider strategic transport plan to link the Port of Sunderland and city centre with the A19.

It will cross the River Wear between Wessington Way in Castletown and European Way in Pallion.

“The New Wear Crossing will help improve traffic flow across the city from the A19 through to the city centre and the Port of Sunderland and create huge opportunities for regeneration and investment along the river bank, so it’s great news for the north east that it’s progressing well.”

The project is scheduled to be completed in Spring 2018.