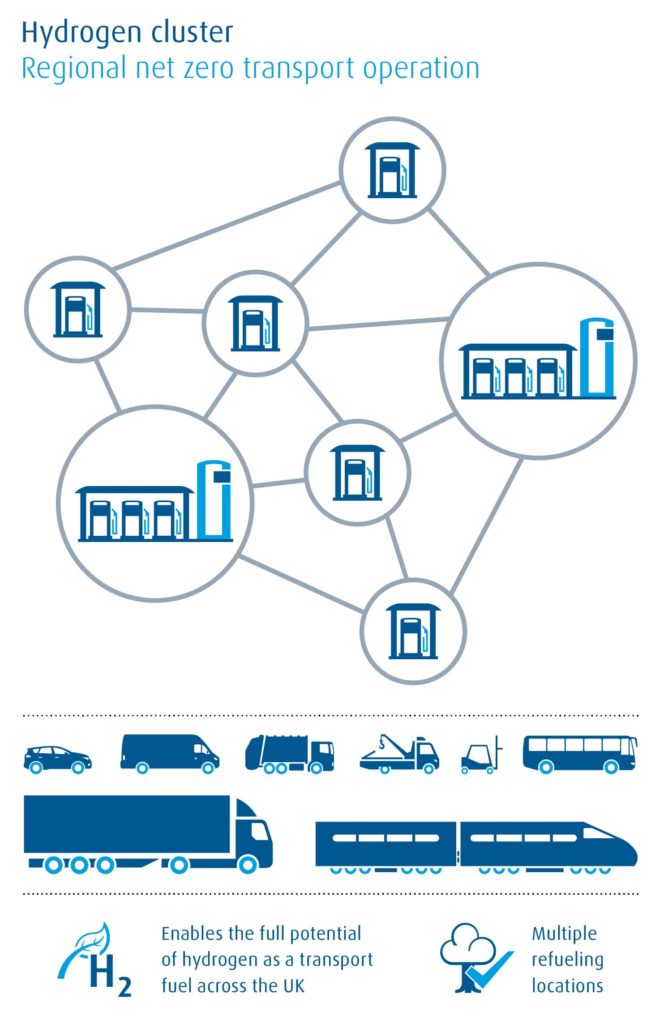 The government’s 10-point green plan, which is underpinning its green industrial revolution, includes “striking new funding” of up to £500m for hydrogen projects such as hydrogen neighbourhoods and villages.

As well as supporting hydrogen deployment, the plan also brings forward the ban on selling new petrol and diesel cars to 2030 and aims to decarbonise public transport, which highlights the urgent need to deliver on zero-emission transport. To facilitate the transition to low-carbon vehicles, the government has also announced funding support for zero-carbon buses.

The use of hydrogen as a clean fuel for transport is attracting serious interest up and down the UK and a number of city councils are already taking action. Aberdeen City Council is expanding its existing fleet of hydrogen fuelled buses, Glasgow City Council has set out proposals that all of the council’s vehicles should be emissions free (a mix of hydrogen and electric) by the end of 2029 and Liverpool City Region is developing plans to use hydrogen to help achieve its 2040 zero-emission target.

“Hydrogen is allowing us to rethink the way we generate and store energy, power transport fleets and heat homes and we are fortunate to have a company like BOC based in St Helens with whom we can work in partnership.

“The relationship will be particularly vital as we move forward on the project to bring a fleet of hydrogen-fuelled buses to the streets of the city region.”

By leading the transition to zero-emission fleets, city and city region authorities like Glasgow, Aberdeen and the Liverpool City Region are accelerating the market growth for hydrogen-powered vehicles.

A hydrogen hub brings together a number of users to share a hydrogen refuelling facility. A large user base creates regular demand for hydrogen and maximises the procurement potential for councils. These financial benefits extend to the purchase of vehicles and investment in the hydrogen refuelling station itself. Producing higher volumes of hydrogen helps to reduce the fuel cost per mile so that it is comparable with diesel.

When cities are able to commit to fleets of 50-100 vehicles or more, the economics of hydrogen refuelling change dramatically. Ambitious local authorities looking to drive up demand and produce higher volumes of hydrogen will find a range of different investment models available, including the option to have BOC fund the capital cost of the refuelling station. This removes one of the biggest barriers to local authorities developing hydrogen infrastructure and frees up capital to invest in vehicles.

Like battery EVs, fuel-cell vehicles cost more than today’s internal combustion engine vehicles. However, members of the H2Bus Consortium are working together to produce a single-deck bus at a price around £300,000 leveraging component cost reductions and increased volumes of production.

Hydrogen is a particularly suitable fuel for larger vehicles, such as buses and trucks. It offers a much better vehicle power-to-weight ratio than batteries, which makes it possible to travel long distances without significantly increasing vehicle weight.

Refuelling with hydrogen is a fast and familiar process, which is similar to refuelling a diesel vehicle. It takes around 10 minutes to refuel a bus, which can cover a range of around 350km, and just five minutes for a car giving a range of 500km.

Today, the adoption barriers facing hydrogen are similar to those of battery EVs: lack of refuelling infrastructure and higher vehicle costs. Hydrogen hubs offer a way to overcome those barriers.

Bringing together a hydrogen hub that serves a multitude of projects helps to realise the full value of hydrogen for transport while offering local authorities a clear strategy and a coherent investment opportunity to decarbonise transport. It helps local authorities to focus on a coordinated scalable hub rather than dealing with numerous, isolated small-scale projects that fail to realise the benefits offered by economies of scale.

A hub demands a collaborative approach between the local authority, fleet operators and other users, vehicle suppliers, sources of funding, an energy supplier or utility and the refuelling station developer. The local authorities are responsible for running various vehicle fleets, including buses and refuse trucks as well as various council vans and cars. Other users can include both public sector organisations such as the NHS and police, while early adopters in the private sector are likely to include taxi fleets, logistics companies, supermarket delivery vehicles and other users that need to travel longer daily distances without the time to recharge batteries.

As well as encouraging businesses to switch to zero-emission vehicles, developing a hydrogen refuelling hub gives private motorists the option to run a fuel-cell car.

BOC’s modular approach to hydrogen refuelling allows hub operators to size their refuelling station to the initial user base and scale up production volumes as demand grows.

Typically, construction takes around 12-months from point of order to being able to refuel. The hydrogen supply is key, which can either be delivered to site from an offsite production plant or produced onsite. To produce hydrogen on-site, an electrolyser is required to extract hydrogen from water. A compressor unit takes the extracted hydrogen and compresses it for efficient storage. The station also requires a hydrogen store, which is capable of storing hydrogen under pressure, and a dispenser for pumping the hydrogen gas to the vehicle under pressure.

The fuel of the future – today

Transport now accounts for a 28% of the UK’s greenhouse gas emissions, with the majority of these coming from road transport.

Hydrogen is no longer a futuristic fuel. Hydrogen refuelling stations are in daily use today, for example at Kittybrewster in Aberdeen, providing reliable and affordable energy for a new generation of zero-emission vehicles,.

To meet the country’s net zero emission targets, we need to fast-track deployment of hydrogen-fuelled zero-emission vehicles. City councils can work collaboratively and take advantage of BOC’s hub funding model to lead this transition and act as catalysts for hydrogen hubs. And, as the number of hubs increase, so regions will develop a cluster of hydrogen refuelling stations that will help realise the full potential of hydrogen as a transport fuel across the UK and beyond.