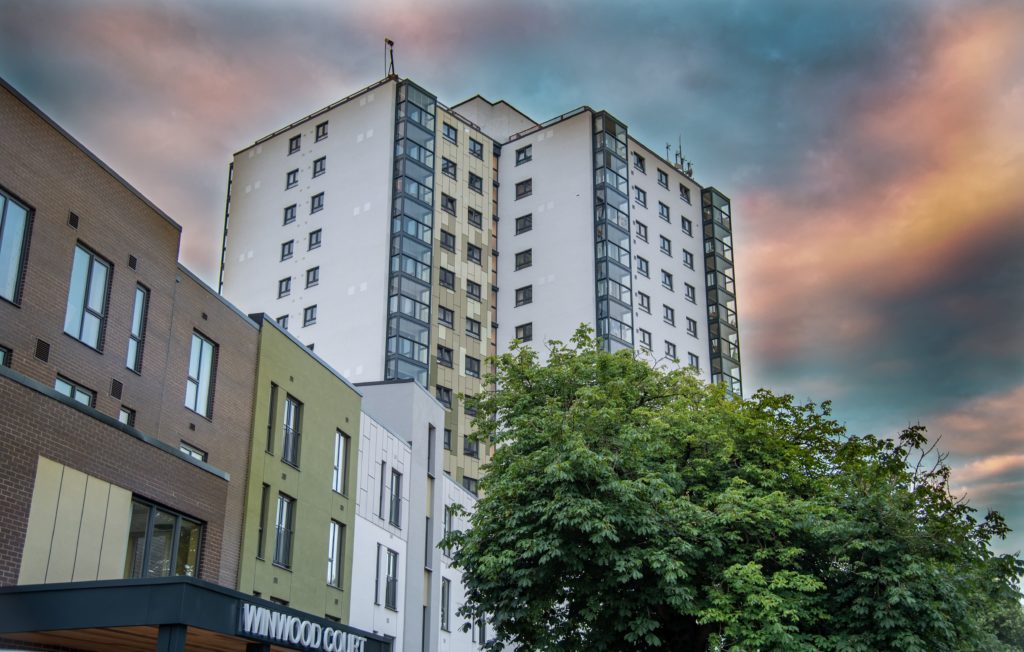 Although care facilities for older people have become a part of everyday life in the last century, demand for services and facilities is ever-changing. When designing a redevelopment project for a community of older people, it’s important to factor in a structured approach to resident relations.

Stuart Kerr from national contractor Willmott Dixon discusses how community engagement was the driving force behind the successful overhaul of a leading Nottingham extra-care facility.

It was completed in summer 2019 on behalf of Nottingham City Homes, and included the renovation of 180 independent living apartments and the demolition of old garages and a community centre to make way for a state-of-the-art extra care centre designed by Halsall Lloyd Partnership and comprising 44 extra care apartments, a sky lounge, a beauty salon and an expansive shared lounge.

The carefully considered approach to resident engagement and involvement is what sets this project apart.

Connecting with the community

Like many extra-care developments, community engagement played a huge role in the Winwood Heights project. Willmott Dixon adopted an innovative approach to engagement by encouraging residents to be involved at every stage, from design and build to completion.

Stuart Kerr, operations director at Willmott Dixon in the Midlands, said: “As soon as the project was awarded to us and we met with Nottingham City Homes, it was clear that a lot of community engagement was part of the brief.

“Engaging with residents and the local community was absolutely integral to the project. We encouraged residents to come to us with their concerns and ideas, and where we could, we took them on board to improve the design and tailor it to what residents wanted to see.

“We held regular liaison sessions which not only allowed us to address any concerns at the root of the problem and reassure residents, but also allowed us to take on board resident suggestions, many of which ended up in the final build. A prime example was the request for the redevelopment of a path that links two nearby roads – it wasn’t part of the original plan,  but we incorporated it into the build as it provided added benefit to residents and the wider community.

“We made sure that residents were involved every step of the way. Going the extra mile to give them peace of mind is ultimately what made this project such a success, both on a construction level and for our project portfolio.”

Nick Murphy, chief executive at Nottingham City Homes said: “From the outset, we knew that we wanted the design to promote interaction between existing and new residents. Having a design that included areas across all five storeys of the new build where people could socialise was key, and resulted in a design that included shared areas ranging in size and intimacy, all of which are accessible for both existing and new residents.

“A spacious and relaxing community hub was integrated into the design of the ground floor of the extra-care apartment building, promoting ease of movement and access between the buildings on-site. A roof terrace was also included that has stunning views across the surrounding parkland to the city beyond.”

By ensuring that both supply partners and residents worked together throughout the planning, preconstruction and construction phases, the scheme was delivered within budget and on time – while also ensuring that Willmott Dixon received a score of 45 on the Considerate Constructor Scheme, something that is rare on a project of this scale.

Designing and building with older people in mind

The most significant elements of the project were the new build extra care facility between the two existing clocks, and refurbishment of the ageing facades of the tower blocks themselves. Throughout an extensive design development process between architect, client and contractor, the brief evolved to maximise the potential of the site.

Stuart Kerr said: “Winwood Heights takes social housing for the over 55s to the next level and sets a new benchmark for older people’s living. We considered the appearance of the building and the way it integrated into its surroundings – the look had to be sympathetic to the parkland setting, and the design for all three elements of the project had to provide a dynamic and modern external aesthetic whilst blending in with the natural environment of the park – we retained mature trees and hedgerows around the site, and planted additional trees and vegetation to enhance its ecological value.”

Nick Murphy added: “The development is Secure by Design, so residents can enjoy peace of mind knowing that they’re safe in their own home. Residents benefit from staff based on site 24/7, and a connection to Nottingham on Call, our 24-hour care alarm system, so that help is always on hand.”

The development – which was procured through the Scape Major Works Framework – included a new EWI (external wall insulation) system, to improve the look of the two existing tower blocks on the site. As well as looking great, the EWI also boosted both buildings’ thermal performance to create warmer and more comfortable living conditions for residents.

Daniel Marlow from Halsall Lloyd Partnership said: “The design of the EWI gives the appearance of cladding panels, but it’s actually render, applied directly to the outer insulation. This system is not only in keeping with the surrounding environment, but is made of a non-combustible material which mitigates the risk of potential fire spread.”

Willmott Dixon’s community engagement didn’t stop at the redevelopment process. They arranged charitable events for residents, such as raising money for the British Lung Foundation, and worked with the wider community to help ensure a lasting legacy. Willmott Dixon also worked with Nottingham City Council to support local people into finding jobs, and supported a school engagement project, Budding Brunels, by offering careers advice and work experience to 25 students. Apprentices were engaged through the supply chain, with over 330 weeks’ experience provided.

Stuart Kerr ended by saying, “It’s been a pleasure working with Nottingham City Homes to create this fantastic facility.  We’re really proud to have been involved.”