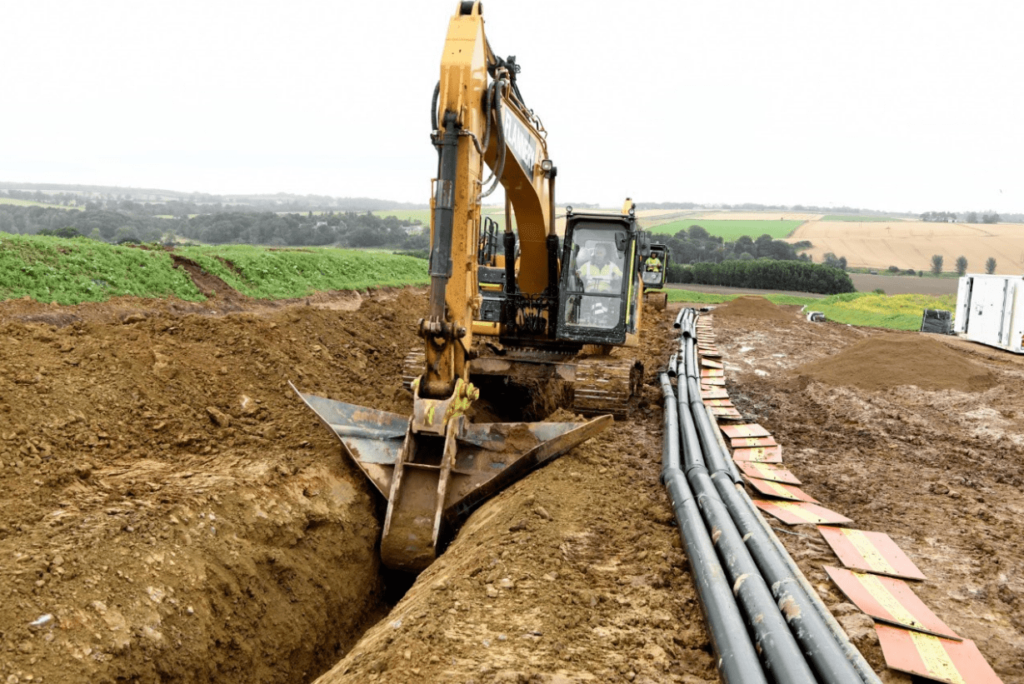 Completion of the Moray East offshore windfarm has come a step closer as Siemens Energy has announced work to install the onshore cable has ended.

The onshore cable starts near Banff, Aberdeenshire and take the power generated offshore from three 220kV subsea cables and transmits it to the new onshore substation at New Deer, where it connects to the grid.

The works started in October 2018 and have seen more than 300,000 metres of high voltage cable laid across the 34.5km route. The cables, which were manufactured in Poland, were loaded onto specialist cable drum trailers and were delivered via road and ferry, ready for installation.

Before the cabling work began, onshore groundworks and assessments were carried out. As an environmentally responsible contractor, Siemens Energy looks to limit the environmental impact of its construction work, and following these assessments, subcontracted the work to a specialist contractor, VolkerInfra, with vast experience in Horizontal Directional Drilling (HDD).

HDD is a minimal impact trenchless method of installing underground cables, using a surface-launched drilling rig, which reduces the impact to people, wildlife, and the environment. It also removes the need to interface with existing utility infrastructure, such as water and gas pipelines.

Mark Pilling, Head of Transmission Solutions, Siemens Energy UK&I, said: “The onshore cable is a vital part of the windfarm, bringing the energy generated offshore into the onshore substation and into people’s homes.

“Using horizontal directional drilling has not only limited the environmental impact of the project, but also removed a large amount of disruption to people’s lives in this rural area. It is likely most people will not know that 34km of cable has been laid through the landscape. We are delighted this part of the project is completed and we are a step closer to bringing the low cost, low carbon power to homes and businesses across Scotland.”

Work to complete the onshore substation is progressing. All civils work on the 20.5-hectare site is nearing completion and all ducting is now installed.

Currently around 245 people are working on site, with all work to due to be finalised onshore in the first half of 2021.

The windfarm, 22 km off the Aberdeenshire coast in Scotland, will have an installed generation capacity of 950MW after its completion. It will be capable of providing low cost, low carbon power to the equivalent of one million Scottish homes, 40% of the country, making a significant contribution to meeting Net Zero ambitions.

Before excavations began a total of 300,000 cubic metres of topsoil was removed along the route and preserved, ready to be replaced upon project completion, restoring the land to its original condition.