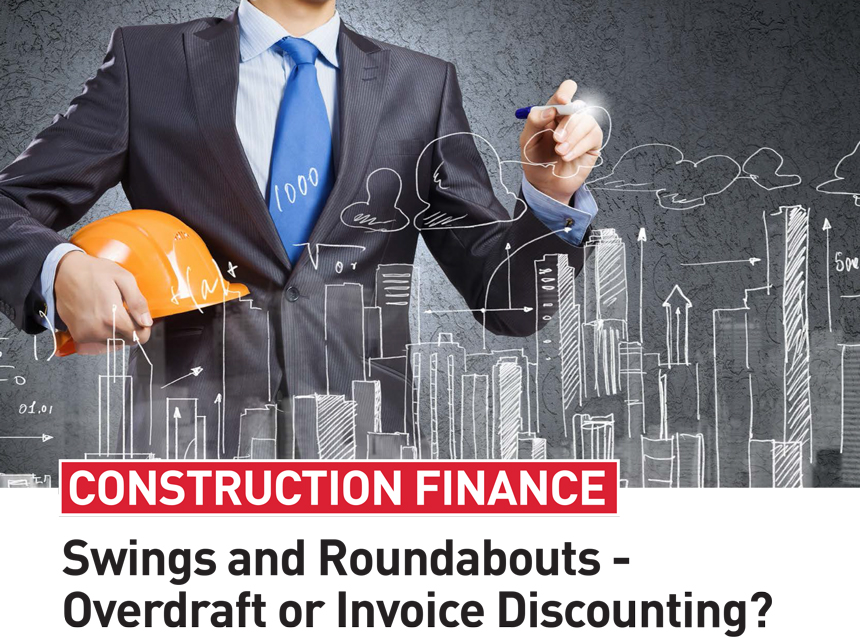 The last 12 months has seen a steady increase in construction activity. Most firms are reporting an increase in order levels as demand for new buildings returns but many firms are also reporting problems with obtaining skilled reliable labour, materials and more alarmingly obtaining access to bank funding. These are all barriers to growth but the lack of access to appropriate funding is a problem that will inevitably kill your business if you don’t get this right.So will it be traditional overdraft funding for your company or would Factoring or Invoice Discounting provide a better solution?

It is no secret that our clearing banks took a beating from the construction sector in the recession and many clearing banks are simply reluctant to lend to construction because it is perceived as a very high risk sector. Any funder agreeing to advance a finance facility will require security. This might be a charge on a fixed asset such as a piece of land or building. Prior to 2001, banks believed that they could rely on monies due in as book debts as fixed charge security and they would have priority over any other creditor including PAYE, VAT and even operative wages. Not surprisingly, overdraft funding was the most widely used type of working capital at that time. The clearing banks ruled the construction finance world at that time – period.

Nothing lasts forever and in 2001 the banking sector was hit by an earthquake with the New Zealand Court of Appeal referring a case known as Re Brumark Investments Ltd (“Brumark”) to our House of Lords in order to obtain a ruling on the status of a fixed charge holder in relation to book debts. This ruling was to change the banking world’s approach to the construction industry for good.

The House of Lords decided that a true fixed charge must give the charge holder absolute control of the proceeds of any book debts. If absolute control of the funds received was not a feature of the facility provided by the bank then the book debts would have to be treated as a floating charge realisation. This was not good news from a bank’s perspective because it meant that it would no longer be sufficient simply to have the proceeds routed through a customer’s account in order to rely on the charge to clear the overdraft facility in difficult times.

In any insolvency, all pre-Brumark fixed charges on book debts would be demoted to a floating charge status meaning that the proceeds received from book debt realisations would be used to pay the costs of the insolvency and any preferential creditors before the banks would have access to these funds. Banks could and did lose money as a result.

The ruling in Brumark is undoubtedly the main reason for the significant growth in factoring and invoice discounting facilities in the construction industry over the last ten years.

Under a factoring or Invoice Discounting facility (“ID”) a receivable debt is assigned (sold) to the funder in return for which the funder offers a pre-payment facility to the customer of anything up to 90% of the book debt. As the ownership of the debt has in effect changed hands and must be paid to the funder, absolute control of the book debt is maintained and the ruling in Brumark has no effect on the factoring or ID facility.

Under a factoring facility a factor takes over the day-to-day running of a company’s sales ledger. Undertaking credit checks on debtors, sending out statements, credit control, collecting payments and instigating legal action if required, are all functions undertaken directly by the factor.

When a contractor issues an invoice (or application), it sends a copy to the factor which, if it approves the debtor’s creditworthiness, will allow the contractor to draw up to the agreed prepayment percentage of that approved invoice or application.

All invoices must have a printed assignment clause to inform debtors of the factoring arrangement. Debtors settle invoices by making payments directly to the factor, who then releases the balance of each invoice (less charges) to the contractor.

An ID facility follows the same principles as factoring with some notable differences. Book debts are still assigned to the invoice discounter, but companies retain day-to-day control of their sales ledger, and the responsibility for credit control. It is essentially “factoring on trust”, since debtors are not aware of the ID arrangement.

At pre-agreed intervals, a contractor is permitted to send in a list of its outstanding invoices (or applications) to the invoice discounter, and is able to draw up to the agreed prepayment percentage of approved invoices and applications.

The contractor collects payments from its debtors in the normal way, but must bank them through a trust account so that the invoice discounter can monitor receipt of the funds. The balance on the account (after charges) is released to the contractor.

In practice contractors rarely use factoring facilities. They are often expressly banned under many forms of contract and there is a perception in the construction industry that a company which factors its debts may not be as financially secure as a company that operates a traditional clearing bank funded overdraft. It is for this reason that an increasing number of contractors and sub-contractors are using confidential invoice discounting facilities rather than opting for factoring solutions.

There is no doubt that the number of invoice discounting facilities is increasing steadily in the construction industry. More often than not, higher funding levels can be generated from an ID facility than via a traditional overdraft and it is increasingly accepted that ID funders have a greater understanding of the construction industry than many of the clearing banks do.

Choosing the right funding solution for your business can be a difficult choice. Which one will you go for? Will it be the swings or the roundabout?

Clever lawyers will be tempted to include a “no amendment” or “anti-variation” provision.

They say there is no such thing as a free lunch, or is there?