Invasive species are a rising problem. In fact, invasive non-native species are now recognised as the second biggest threat to biodiversity worldwide, which is why it is important that we can distinguish the threats. For example, Japanese Knotweed is an extremely aggressive alienating species. From an ecological point of view, it destroys the habitats of native species putting bioregions at great risk, which is subsequently a threat to our environment. In addition, Japanese Knotweed is listed by the World Conservation Union as one of the most invasive species due to its continuous growth, of up to 20 centimetres a day, and extremely difficult nature to remove. Overall, it is incredibly detrimental to buildings and land, blocking footpaths, damaging concrete, tarmac and the stability of river banks – hence, a huge threat not only in the landscaping industry, but to many other vertical sectors from railway networks to highways, water networks and the property industry to name a few. 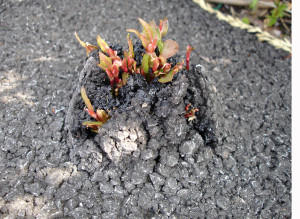 Today, invasive species are causing structural damage to the tune of £2.1 billion per year according to figures from the Environment Agency and the Department of the Regions. It has got to such an extent now that the Royal Institute of Chartered Surveyors now survey for Japanese Knotweed in or near the property as part of its mortgage survey. If it is present, not only will the property be devalued by around 40%, it will also affect neighbouring properties’ values and often results in subsequent litigation.

And it’s not just Japanese Knotweed, although this is the most pernicious to control. A further invasive species to be mindful of is Himalayan Balsam, which spreads its seed through biological ‘explosions’. These seeds can remain viable for five years, meaning a long-term treatment regime is crucial. Additionally, giant Hogweed contains sap that can cause horrific blisters on contact with skin. The only good news is that it is susceptible to herbicide if treated correctly.

Japanese knotweed growing out of control

Did you know that there are three species of Knotweed currently growing in the UK, up from just one a few years ago? These include Japanese Knotweed, Giant Knotweed and Hybrid Knotweed. 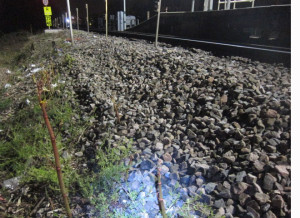 Why is this a problem for property owners, transport and utilities networks and the construction and estates management/FM sectors? According to Neil Huck, Ground Control’s National Training Manager and Invasive Weeds expert, invasive species such as Japanese Knotweed are becoming a serious problem due to the increasing requirement to manage properties and structural assets ranging from electricity pylons, sub stations and reservoirs to railways, tunnels and bridges in often difficult access areas where these invasive weeds are growing. Let’s be clear: having invasive weeds growing near any structure is a big problem, not only due to its ability to degrade the infrastructure and therefore make it weaker, but also the subsequent cost to remove it completely with no possibility of it growing back.

To place this into perspective, allowing the spread of Knotweed from any site into neighbouring properties could subject you, the property owner, to fines and removal costs as well as law suits. There is then the silent cost: your reputation. With the huge rise in such digital media as social media, an organisation’s reputation can quickly become soiled due to people posting messages across platforms including Facebook, Twitter and even LinkedIn.

At Ground Control, we are both an innovator and a pioneer of technology, delivering a range of services including grounds maintenance, winter maintenance, tree works and vegetation management, soft and hard landscaping, ecology, design and build, pest control, fencing, window cleaning and roofing services. Additionally, our managers are expertly trained to work across the range of possible systems and site types to ensure that you continue to deliver services for your customers throughout the year. 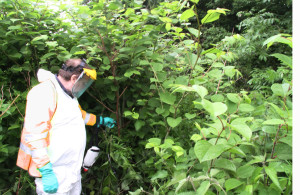 Timing of treatment, whether it is for Knotweed or another invasive species, is critical for achieving acceptable levels of control, and early engagement of Ground Control is recommended. For example, did you know that Japanese Knotweed is an herbaceous species which lies dormant throughout the winter? This means that it is incredibly difficult to pick up during these months. However, don’t be fooled as it will start to appear in mid to late March and is most active throughout the summer growing season. To be able to spot any invasive species on the likes of rail networks, knowing what they look like is critical. Presently, Ground Control is assisting Network Rail in the training of its staff around what to look for when identifying invasive species including Japanese Knotweed. This includes their natural habitats, what environmental factors increase their growth and most importantly, what to look out for. This way, rail engineers and other staff will know what they are looking for during their everyday activities, therefore speeding up the process of treating it before it impacts on such areas as neighbouring cities and villages.

Following identification, the next step is to call in the experts, for example Ground Control. Ground Control can assist rail networks in creating a long-term strategy, that includes a sustained annual tri-treatment chemical control regime, resulting in the saving of much needed money in comparison with the likely significant cost of having to dig up and remove the invasive species from at worst, underneath the rail tracks. In addition, Ground Control’s services include:

Invasive species such as all forms of Knotweed (Japanese Knotweed, Giant Knotweed and Hybrid Knotweed) and Himalayan Balsam should not be ignored if we are to continue to build on and around land where they inhabit. Although organisations like Ground Control are trained in their identification, control and removal, it is also important we educate and inform personnel in sectors such as rail around their natural habitats, what environmental factors increase their growth and what to look out for. By taking these important steps, we will not only reduce the impact of invasive species, but also the cost of dealing with them.

For more information on how we can help you, click here: https://www.ground-control.co.uk/invasive-weed-management/